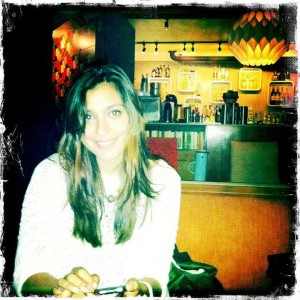 This story is about…

What motivated you to start your business?

At the end of last year, it was becoming more and more apparent that my husband, Michael, was in the process of losing his job.  So it wasn’t too much of a surprise when he got the letter in February this year.  With redundancies rife in all industries, we decided to see this as an opportunity to do something else.

I don’t know about you, but since graduating back in 2001, I found myself working hard but not really doing anything that made me excited or passionate.  It’s not that I hated what I was doing, actually I was, in a sense, one of the lucky few that enjoyed my daily tasks.  I love being organised and having “to do” lists, so as an events manager, it satisfied every bit of my OCD.  But that was all it did, and it was starting to feel a little same old same old.  I found myself saying, “Well, it’s not what I want to do forever or anything, but it will do for the moment.”  Almost as though I was still a school kid saying, “When I grow up I want to be…” Well, at least that’s how it felt – like a kid with lots of dreams.

Don’t get me wrong, Michael and I always had plans for an online project but it was always put to one side for a “better time.”  Turns out there really is no better time, no perfect moment in life to start anything.  Now, I know that some may say, when you have just lost your job, that this in fact could be the worst possible time and maybe following the norm and getting something more secure would be the sensible thing, and wait to start that project.

“Meh” is what I say to that. Why should anyone follow the norm?  Ok, so we have no guarantees, even now, I mean we all know the saying, “you never know what’s around the corner.”  And although that is true, you also hear so many more people talking about regrets, about not trying when they had a chance.

So we took this quite scary moment in our lives when we both found ourselves unemployed and saw it as an “opportunity” (yes, I read Feel the Fear and Do It Anyway and I quote the shit out of it at any opportunity).

Tell us about your business…

We knew what we wanted to do; we’ve been wanting it for a very long time. East London is a great hub for creativity and design.  From the street art and the great markets to the fearlessness of people’s individual style and their willingness to be different, it gave us a lot of inspiration.

Seeing the difference in quality and the love that goes into an item when you buy it from an independent designer, we wondered how amazing it is to be the person that showcased their work.  We wanted an online collaboration for independent British designers to sell their wares.  A site that would act as a platform and a community for designers, but also we wanted it to be exciting and fresh for those sick of mass produced goods, for those wanting to show their individuality and creativity in their home and style.

So at our local pub, escaping the February snow with a pint, notepad and pen in hand we started penciling in a business plan for The Lost Lanes.  It seemed like the sort of thing grown-ups do, and it felt so good actually making an action plan and getting a list together of what needs to be done.

What were the first few steps you took to get your business up and running?

Aware that our love of East London’s creativity was just a snapshot of what exists in the UK, we carried on our search.  We went to markets, trade events and we searched endlessly online. Then we made contact with designers that we thought would suit our brand and style.

We started developing a website and we found a programmer to help out with all the trickier technical details that we couldn’t quite grasp hold of.

We decided to spend some money on a logo. We wanted something really good as our logo would be our brand and we decided that was worth spending a little more money on.

At the end of April, two months after our handwritten plan, we launched the site.

What has been the most effective way of raising awareness of your business and getting new customers?

Social media and fashion bloggers have been the most effective way in raising awareness. I have been so grateful at how particularly supportive and encouraging bloggers are with new businesses. They have completely understood what we are trying to do and we have already built a great relationship with bloggers who we hope to be able to continue working alongside.

What have been your biggest challenges so far with running your business?

It’s been hard work, but every moment has been exciting.  I mean, yes, I’d be lying if I said there were no scary moments, or small blips, we’re doing everything ourselves after all, from the graphics, PR and marketing to our social media and collaborating with the designers.

Our biggest challenge I would say was making initial contact with the designers.  We were asking them to join us without having an actual website or branding for them to look at first.

In essence, we were expecting a lot of trust approaching them as complete strangers.

How did you overcome these challenges?

We thought the toughest part was to get the designers to believe in our project.  Initially, when we contacted each designer, we emailed them with a proposal explaining more about who we are and more about the project. We decided to not beat around the bush and instead be completely honest.

We didn’t want to guarantee anything that we couldn’t uphold but instead be completely transparent with what we were doing.  Being honest paid off. The people we contacted were not only supportive of the project but also they were eager to spread the word and work with us.

What do you love about running your own business?

There are so many reasons to love running your own business, but if I had to narrow it down then I’d say the unknown is exciting, every day brings new challenges and you learn so many new skills.

What advice would you give to other business owners?

Being so new, I don’t think I’m fully qualified to offer any business advice.  But what I would say is never put anything off. You’ll be amazed at what you can achieve and what is actually possible.

You never have anything to lose by trying. And trust in people around you.  Network as much as you can, gain experience from those who have already succeeded and chat to people who, like you, are just starting out. Share your fears and frustrations, you never know what you’ll learn.

How do you keep motivated through difficult times?

If you have a bad day, you just have to put it behind you, get up and dust yourself off.  Analyse what went wrong, work out if/how you can stop that from happening again.

My husband always says, “If it were easy everyone would be doing it.” I think he’s right and even when things are really bad you have to remember that.

“Imperfection is beauty, madness is genius and it’s better to be absolutely ridiculous than absolutely boring.”

Who inspires me? This is a tricky question, I love meeting all the young designers we have on our site. When they talk about what they do they seem so passionate.

It’s a bit corny but my mum has always made me feel like anything is possible. She worked so incredibly hard for us when we were kids and would insist on encouraging us to do better things with our lives.

A few years ago I went backpacking on my own to South America; I ended up chatting to lots of street kids during my days out.  They gave me so much inspiration, they were filled with hopes and dreams.  They showed me how lucky I was to be in a position to do anything I wanted with my life.  They were incredible kids with ambitions in their life to study and be somebody.  I still think back to them every now and then when I start to feel sorry for myself. My small blips and fears suddenly seem less serious, less important and in fact fixable.

Do you have a business philosophy?

Be honest, upfront and trust in people.  People can be amazing. Humanity is a wonderful thing if you give people a chance.