The Journey Of A Decade To My Dream 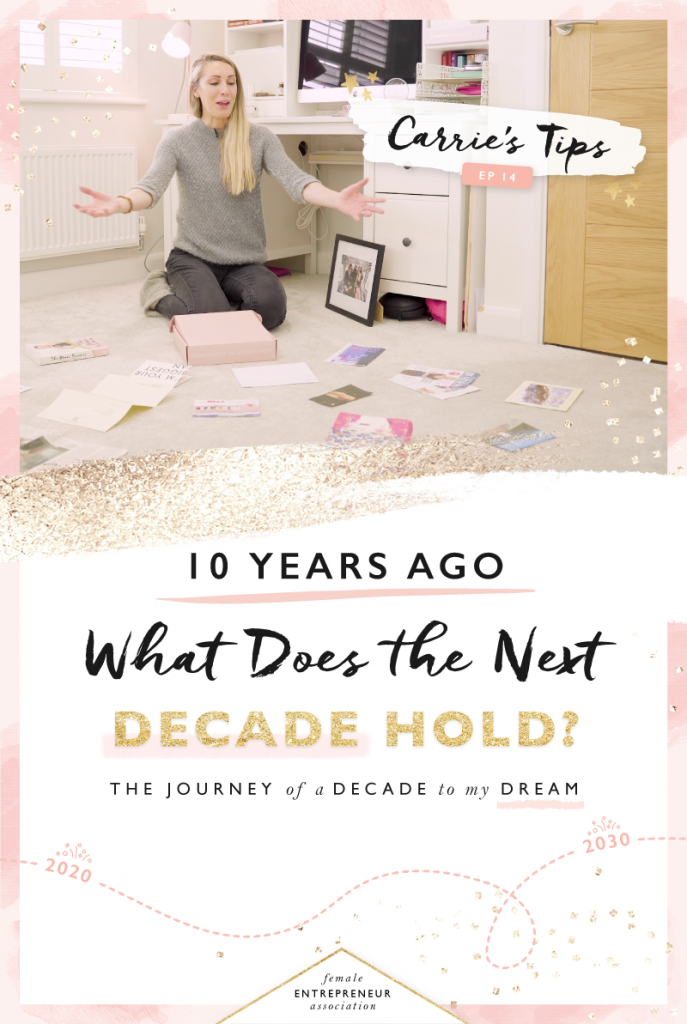 So with 2020 around the corner and as I was planning and visualising what I’d like the next 10 years to look like, it got me thinking about where I was 10 years ago and everything I’ve actually accomplished over the past decade.

With a new 10 year cycle just ahead of us, this is such a great time to get more intentional about what you want the next 10 years to look like and how you’re going to make it the best decade ever! So I wanted to share with you a timeline of the last 10 years of my life.

This is a longer post than usual (a LOT has happened in 10 years!!) but I just want to show you how radically different your life can become when you commit your heart and soul to fulfilling your dreams. So here we go…

2009: Back in 2009, I had just built a phone unlocking business (which really bored me to death!!) and even though it was successful, I was miserable, because I wasn’t passionate about what I was doing.

So I started trying to figure out what it was that I was passionate about. I knew that I loved helping other people, so I signed up as a volunteer business mentor for the Prince’s Trust. But I still felt like there was something missing in my life, like I wasn’t doing what I was meant to be doing. It got to the point where I felt so low, confused and lost.

A year before, in 2008, I’d had the idea to create a platform to inspire women in business, but kept standing in my own way and avoiding that idea because I was doubting myself. I just kept trying to do everything else and feeling so lost.

2010: At the beginning of 2010, I decided to escape to Australia in search of an epiphany. I travelled around Australia for three months and had absolutely no epiphany whatsoever! I came home feeling even more confused than before.

2011: By this time I was feeling more miserable than ever because another year had gone by and I was still as confused as ever. Luckily, I reread a brilliant book I loved, called The E-Myth Revisited, by Michael Gerber. In this book, there’s an exercise where the author gets you to imagine your funeral and pushes you to ask yourself questions like what would people think about the life you lived and the person you were.

I realized that I no longer wanted to be this miserable person who constantly felt stuck, lost and confused. I wanted to stop going round in circles year after year and I’d had enough of my own crap! I came across a quote by Tony Robbins that said, “In 10 years you’ll surely arrive, the question is where?” And whilst I had no idea where I wanted to arrive, I was ready to open myself up to going on an adventure to make the next 10 years the best 10 years.

So I decided to go on a mission I like to my “Mission Success Challenge”, and decided that I was going to challenge myself to see what would be possible if I conditioned myself for success, if I stopped the self-limitation and found out what I could achieve if I just went for it. What could I make happen if I just allowed myself to dream big and to try and live my dream life.

I bought myself a journal and began writing out my story up until that point. I had come up with the idea for FEA in 2008, so I made the decision to figure out how I was going to build it, how I was going to live my best life and how I was going to achieve incredible things. All of a sudden I had given myself permission to just go for it. I wrote:

“The moment one definitely commits oneself, then providence moves too. All sorts of things occur to help one that would never otherwise have occurred. Whatever you can do or dream you can do, begin it. Boldness has genius, power and magic in it. Begin it now.

I decided that one day I was going to turn this journal into a book and publish it with Hay House. And that was part of the vision. (Hint: It happened a few years later!!)

Finally, after three years of sitting on it, I launched the website for the Female Entrepreneur Association. I built it myself on WordPress and was so proud of it! A couple of months later, I launched my first event and 60 women attended! I contacted the local media, got some press coverage and it was amazing!

And after that I just kept focusing on getting myself out there and networking like a crazy person! I’d never had the guts to put myself out there like that before – I was finally doing it and it felt so good!

That same year, The Telegraph newspaper published an article all about the Female Entrepreneur Association and this felt like such an incredible moment for me because I was finally moving in the right direction.

2012: The more momentum I started to build, the more I started dreaming big. At the beginning of 2012 I began working on a digital magazine, This Girl Means Business, and was interviewing all these amazing women and working hard on getting the message out there.

I wanted to create more awareness and build an incredible community, so I decided that I was going to start doing videos.  I had no idea what I was doing and I was so petrified and when I look back they look so awful, but everyone has to start somewhere!

I was determined to figure things out, to get better and to just keep putting my message out there so I stayed consistent with it, doing one video every week. People still find and discover videos I put out there in 2012 and that’s how they’re finding me and FEA now. It’s been so powerful!

In Autumn of 2012 I was nominated for an award called the Changemakers and I was up against 26 other incredible entrepreneurs… I won and couldn’t believe it! I was presented the award and then got into a helicopter mentoring session with Lord Bilimoria, founder of Kobra beer. I had visualized this moment over and over again in the run up to the award night and it was actually happening!

A couple of months after that I totally ran out of money because I was so focused on just inspiring people, serving my audience and providing free value. I had developed this warped belief that if I started charging, I would become out of alignment with my goal and my intentions with building the platform in the first place. It’s crazy how our own money blocks hold us back!

So by the end of 2012, I realised I needed to work on this mindset and my money blocks and amazing things started to happen! I started to do joint ventures with the likes of Lewis Howes, Amy Porterfield and James Wedmore and serving more people!

2013: By 2013 I was still focused and working on getting myself out there and was gaining incredible opportunities, such as speaking at the UK House of Commons for International Women’s Day, which was again an amazing milestone.

By the end of 2013, I finally plucked up the courage to actually launch my membership site, which had been on my goal board for years but I had been too afraid to do it. Since then it has grown to over 5,000 members and has been the most phenomenal experience.

2014: In 2014 I was invited to do a TEDx talk, which had also been on my vision board! I was invited to speak in front of nearly 1,000 people and that video has now racked up nearly 7 million views on YouTube, which blows my mind!

2015: Following on from that, in 2015, I received an email from the Commissioning Editor of Hay House publishers in the UK saying that she had been following me for about six months and was interested in offering me a book deal! I couldn’t believe it, this had been on my vision board for years!

2016: I finished writing the book, She Means Business, in 2016, and in the meantime kept working on building my business, growing my audience, serving them and providing as much value as I could.

2017: My book came out in 2017 and it was just the most surreal experience walking into book shops everywhere and seeing my book on the shelf! So much of what I wrote came straight out of that journal from 2011!

2018: In 2018 I finally made my dream come true of actually creating a physical product. I launched the Carrie & Co. Perfectly Planned planner, which has been amazing to have something I’ve created that I can physically touch and hold.

And the rest is history! It has been an amazing journey and it’s insane to think of where I was back in 2009, when I was just down in the dumps, feeling so low, so lost and confused, too afraid to commit to my ideas!

That decision to give myself permission, that commitment to creating success changed my life!

So what I would say to you is, where were you 10 years ago and what has your journey looked like since then? Take some time to think about all the good stuff, as well as all of the things that didn’t really go to plan and learn from everything! Just create awareness as to why the last 10 years have gone the way they have and then start thinking about what you want the next 10 years to look like.

Just know that change will happen, but get really intentional about creating success, living your best life and building the business of your dreams. That’s what this is all about.

So take some time now to start focusing on where you want to arrive in 10 years and start creating this picture for yourself. As a start, focus on making 2020 an absolutely incredible year where you can kick off this next decade in the most magical, inspired way possible.