Our 2023 business planners have arrived, pre-order yours today.
CLICK HERE

How to get to where you’re trying to go

I’ve gone from zero fans on Facebook to over 86,000, from zero visitors to my website to nearly 4,000 per day and I think there’s one thing in particular that has had a MASSIVE impact on me making it happen. It’s a game changer, and I say that because when you implement this thing you really do change your business game plan.

So what is the game changer I’m talking about? It’s consistency (I know it sounds boring, but hear me out)…

We live in a fast-paced, digital world. Which on the one hand is amazing, but on the other hand has detrimental effects. Thanks to the internet and social media we’re bombarded with new ideas, new ways of doing things, new opportunities, new experts, new success stories and so on, which is fine, but because of this people are hopping from one idea/social media strategy/opportunity to the next and not achieving very much at all.

I’ve been there myself! You hear someone talking about how incredible YouTube is and you get so caught up in what they’re saying that you decide that you want to do it too, so you get started with it, but begin to realise that it’s perhaps not as easy as you thought and it’s going to take a lot of effort to get traffic to your videos. After a little while you lose enthusiasm, but luckily at the same time someone else has come along telling you about how wonderful Facebook is and you decide that’s what you’re going to focus on instead, so you get started and then quickly realise that it’s not quite as easy as you thought and so you begin to feel like it’s not right for you. Then you come across an incredible person who runs a really successful podcast show, you hear that they make over $20,000 a month in sponsorship and think to yourself, “Hmmm I could do that too!” so once again you set off on your journey to make it happen. The cycle repeats.

This is just an example, but it happens to a lot of us, and like I said, it’s definitely happened to me… it’s hard for it not to happen, because when you want to succeed you’ll try just about anything to make it happen! And when you’re running a business you can end up feeling so frustrated because it’s not happening as quickly as you’d like and it’s really hard, so you start to question everything and then just keep looking for the next thing that could really help you.

Now, don’t get me wrong, I don’t think there’s anything wrong with trying out new strategies and staying open-minded about new opportunities, but I do believe that in order to succeed at anything and make those strategies work you have to be consistent!! That means you have to keep going, even when you hit a rough patch. You have to make a commitment to stick at it.

That is how I’ve built my businesses. Even though I wished I could have grown them overnight, it took me years. Take the Female Entrepreneur Association for example, it’s taken me nearly three years to get it to where it is today. There were soooo many times when I thought I’d actually lost my mind and should quit. There were so many times when I got distracted by new, exciting opportunities – in fact last year I nearly threw it all in to take a job I’d been offered! But I didn’t, because I committed to what I wanted to achieve.

But how do you stay committed and consistent in a world which is so fast-paced? In this week’s video I share some strategies that have really helped me along my journey. Have a watch below.

So, decide what you want to be consistent about (don’t overwhelm yourself with too many things, it will be exhausting!) and stick to it. 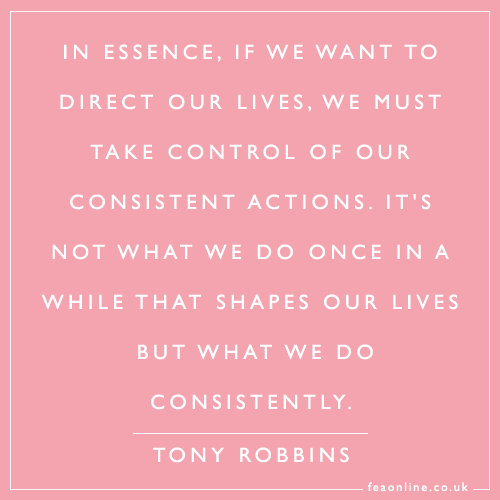 Add consistency to your game plan, and commit to what you want to achieve for the long haul.

I’d love to hear what you think about this – have there been times where you got distracted by new opportunities and new strategies and then found yourself hopping all over the place, not doing anything particularly well? What helps you to stay consistent? Leave a comment below and share your experiences and thoughts!

I’ll see you next week for another dose of inspiration!